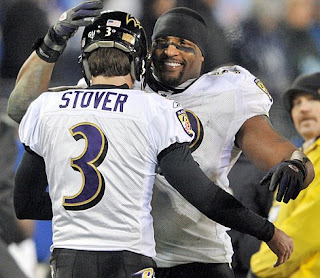 I still haven’t fully recovered from that one.

During the second half of the Ravens’ 13-10 victory over the Tennessee Titans, I was doubled over from nerves and could barely watch. That doesn’t happen to me often. And at this rate I’ll be watching the Ravens/Steelers AFC Championship game from the ER waiting room.

Needless to say, the game was as smash-mouth as football can get. It was like watching two heavyweight fighters stand toe-to-toe for 12 rounds, wailing on each other, barely able to stand, and hanging on each other as they are too tired to throw another punch.

But in the end, the turnover battle was the big difference. The Titans bettered the Ravens in pretty much every statistical category, totaling 391 total yards to the Ravens’ 211, but Tennessee committed 3 turnovers deep in Ravens territory and that was the difference.

And with the score tied 10-10 and about 4 minutes left in the game, the Ravens got the ball, and Joe Flacco drove down field and Matt Stover capped off the victory with a 43-yard field goal.

Joe Flacco has yet to commit a turnover in the post-season and that is all you can really ask him to do. He turned in another workmanlike performance, tossing for 161 yards and a 48-yard TD pass. He is the first QB to win 2 games in the playoffs and one more would make him the first rookie QB to reach the Super Bowl. This kid doesn’t stop impressing you, does he?

Derrick Mason came up huge for the offense yet again, catching that 48-yard TD bomb and totaling 78 receiving yards. Mark Clayton caught 2 for 45, but the big one was an amazing 37-yard pass caught in double coverage that set-up a go-ahead field goal to make the score 10-7. Say what you will about the Ravens wide-receivers, but they are making some fantastic grabs this season. A welcome change from the Clarence Moore and Frank Sanders days.

But the story of the day was the defense. Their bend-don’t-break mentality was the difference. The Titans were having success moving the ball in the first half, and Chris Johnson was poised to have a huge day running the ball (72 yards on 11 carries and a TD) until he was folded up like a metal chair in the third quarter and didn’t return. LenDale White pounded the ball well at times, and was tackled at the line of scrimmage at others, and amassed 45 yards on 15 carries. His fumble deep in Ravens territory was crucial. Titans’ WR Justin Gage had a huge day, shredding the Ravens secondary for 135 receiving yards.

But when it came down to crunch time, the Ravens came up with huge turnovers (A Samari Rolle interception of Kerry Collins, and fumbles from LenDale White and Alge Crumpler) stopped impressive Titans drives.

The obligatory controversial call (there is always at least one in these kinds of physical games) came on the Ravens final drive, when Flacco seemed to get an extra 2-3 seconds after the game clock expired before completing a huge 23-yard pass over the middle to Todd Heap to set up Stover’s game-winning FG.

Yes, it was a bad call that ultimately contributed to the Ravens victory. Who knows what would have happened if the delay of game penalty was called and backed the Ravens up 5 yards. But one thing is for sure, the Titans 3 turnovers on the Ravens side of the field didn’t help either. And Ravens fans should know all about that after allowing the Steelers to drive 92-yards for a controversial touchdown in week 15 to lose the game.

If you put yourself in a position to allow the refs to lose you the game, you don’t deserve to win anyway.

However, the win didn’t come without its setbacks. Samari Rolle was injured and may miss the AFC Championship game. Le’Ron McClain and Terrell Suggs both missed time with scrapes but appear to be OK for next week. And one has to wonder if the Ravens will run out of gas after playing 17 consecutive games after Hurricane Ike bumped their bye-week up to week 2 of the regular season.

The Steelers are going to give the Ravens another hard, physical game and take it up a notch. Running the ball will be even harder than it was against the Titans. Which is exactly why the Ravens should try to come out with a different game plan.

They should let Flacco throw early and often, and throw deep. It worked against the Titans. And even if you don’t complete the deep pass, the possibility of getting a pass interference call is always there, and any deep-pass interceptions can be written off as non-4th down punts.

I really wonder if the Ravens can turn in another physical game like the one they just played. The Steelers are completely healthy and rested after their first round bye and an easy win against the Chargers.

The Ravens have proven that they can win on the road, but you have to keep wondering if they can do it again.

I think they can.

The Ravens take on the Pittsburgh Steelers in the AFC Championship game this Sunday at 6:30 p.m.
Posted by SeanJ at 11:08 AM