Ravens fumble away win to Steelers 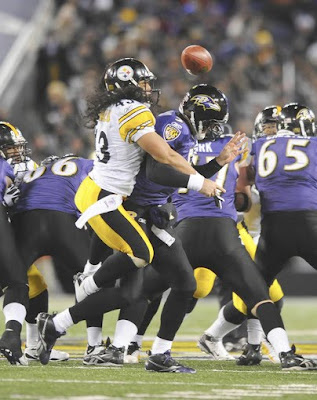 Fumbled Away: Troy Polamalu causes a Joe Flacco fumble that set up the Steelers game-winning touchdown.
Well, it finally happened.

It was as bad as Bill Belechick going for it on 4th and 2 on his own 30 yard line against the Colts last year. It was almost as bad as Marty Morningweg opting to kick the ball off in overtime.

Trailing 13-10 with less than a minute to go at the Steelers 31-yard line, John Harbaugh elected to go for it on 4th and 2 instead of bringing in strong legged kicker Billy Cundiff for a 49 yard field goal attempt.

On that 4th down, Flacco passed to the left for an incomplete. The ball was tipped at the line of scrimmage and bounced to Ed Dickson. Game over, Ravens lose to the Steelers, 13-10 and put themselves in the hunt for one of two wild card spots at 8-4.

Granted, Cundiff's potential 49-yard game tying kick wasn't a gimme by any stretch of the imagination. But it was the call that should have been made. Going for it on 4th and 2 would have only prolonged the drive, and Harbaugh used the last timeout before opting to go for it. Had they converted the 4th down, there would have been no more timeouts and Cundiff would have had to rush a field goal kick.

It was just an inexcusable decision by Harbaugh. And this is coming from someone who has routinely stuck up for him when Ravens fans criticize him for being too smug with the media and a jerk. But his decision last night was just troubling on every level.

Harbaugh blamed the wind for the decision to go for it, and said the ball wasn't tracking well during field goal practice kicks before the game. And yes, the wind was blowing hard last night and Cundiff would have been kicking into the direction of the wind on the east side of the stadium. But from where I was sitting, the flags on the eastern goal posts were not blowing at the time of the 4th and 2. The Ravens had a window to kick a field goal and they decided to close it instead.

Harbaugh's questionable decision making was the final nail in the coffin, but it is arguably not the biggest turning point of the game. Up 10-6 on their own 43 yard line, with 3:13 remaining, Flacco dropped back in the pocket to pass on 2nd and 5 and was immediately hit by Troy Polamalu (who else?) and fumbled the ball. The Steelers recovered the ball and returned it to the Ravens 9 yard line where they scored on a Ben Roethlisberger pass to Isaac Redman 3 plays later.

The Ravens are routinely blasted for being to conservative with small leads late in games, and they played conservative many times last night. But just when they decided to get aggressive, and pass on that 2nd and 5 so late in the game, it blows up in their face. No one touched Polamalu on his way to Flacco, so there was a missed assignment in there somewhere. It was the Steelers being the Steelers, and getting the big play they need late in the game to steal another win from the Ravens.

There were some positives that are sure to be overshadowed. Joe Flacco played pretty well, completing 17 of 33 passes for 266 yards, 1 touchdown and 0 interceptions. He made some great passes on the scoring drive in the first quarter. Anquan Boldin had a huge night, catching 5 balls for 118 yards and a score. And the defense played exceptionally well last night, bending but not breaking against the Steelers, who scored their only touchdown after the Flacco fumble gave them the ball at the Ravens 9 yard line. The defense's lone stumble was on the Redman touchdown, where they missed several tackles.

After the game, Derrick Mason was critical of the offense, saying what has been on the minds of Ravens fans since the beginning of the season. Why is the Ravens offense failing to take advantage of the multiple weapons it has? There has never been a good rhythm on offense since the beginning of the year, and it looks like there never will be one in 2010. It's week 13 and the Ravens are a mediocre 14th overall in yards and 17th in points scored. Is it Cam Cameron's play calling? Too many chefs in the kitchen on offense in Boldin, Mason and Houshmandzadeh?

Who knows. But the Ravens better figure out what they want to be on offense and stick with it. Last night they came out with a game plan -- to pass on the Steelers -- and it worked for a short period of time, as Anquan Boldin slipped past his defender for a wide open touchdown catch in the endzone in the first quarter. But after that touchdown, the Ravens predictably let off of the gas and allowed the Steelers to do what they do best -- chisel their way back into the game.

So where does this loss put the Ravens? At 8-4 and in the 6th playoff spot. Whoever loses between New England and the New York Jets tonight will have the 5th spot with the winner of tonight's game, the Steelers, Jaguars and Chiefs as the leaders in their division.

The Ravens still control their own destiny to make the playoffs, but with last night's loss, a division title is looking impossible. The Ravens have a tough schedule remaining, with games at Houston, home against New Orleans, at Cleveland and then home against Cincinnati.

The Steelers, meanwhile, have three home games in a row against Cleveland, New York Jets and Carolina before closing out the season at Cleveland. It's gonna take an epic Steelers meltdown for the Ravens to make-up two games against the Steelers for the division. I don't see it happening, which is why I'm not sending in the money for home playoff tickets. If the Ravens make the playoffs, they're gonna have to do what they've always done: go on the road.

Meanwhile, the Ravens locker rom is not a place you'd want to be right now. Reports are that the underlying tensions between offensive and defensive players are starting to come to a head. The dislike of Harbaugh by some players is starting to cause problems. How this team responds in Houston next Monday night after such a demoralizing loss at home to the Steelers is what could be the difference between a playoff spot and watching the playoffs from home.

So there it is.

It was the kind of game you expected, but in the end, the result was inevitable against those MF Steelers. And as with each loss so far this season, Ravens fans can't help but feel like they let another one slip through their fingers.
Posted by SeanJ at 9:09 AM