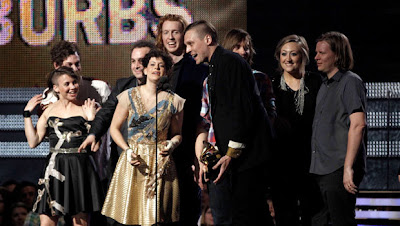 There may be hope for the Grammys after all -- the Arcade Fire won "best album of the year" over the likes of Eminem, Lady Antebellum and Lady Gaga.

It's still an insult for the Arcade Fire to have been nominated with those other shitbombs, but thankfully, the Grammys got it right in the end. The Suburbs was one of the best albums of the year -- and shocker -- actually an album. It had a common theme from beginning to end and wasn't a vehicle for a slew of radio-friendly singles to be strung together. And the Arcade Fire are one of the best bands around today. Three albums into their career, you have a feeling that they're just getting "Ready to Start".

Yeah, I just said that.

Anyway, their win should have fans of indie rock cheering. It's about time an indie band gets some mainstream accolades. Not only are indie tunes routinely used in commercials, they are also supply the soundtracks of many of today's popular television shows. Yet no mainstream radio station dares play an indie band like the Arcade Fire. And I doubt their Grammy win will change any of that any time soon.

Oh well, I almost prefer it to be that way.

But like Kanye West said on Twitter after the Arcade Fire shocked the world, "There is hope!!! I feel like we all won when something like this happens! FUCKING AWESOME!"
Posted by SeanJ at 3:07 PM