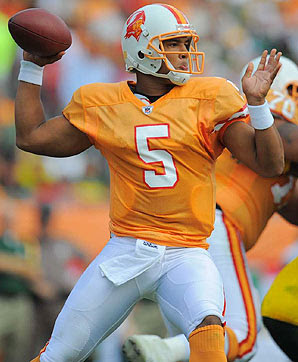 Gotta love those unis! Josh Freeman is leading the resurgent 7-3 Buccaneers into Baltimore.
The Tampa Bay Buccaneers are 7-3, same record as the Ravens. This is a team that was 3-13 a year ago and many thought would fight it out with the Panthers as the last place team in the NFC South.

But the Buccaneers have opened the eyes of many in the NFL, and at 7-3, it's time to take them seriously.

Josh Freeman, a second-year QB out of Kansas State, is having a tremendous season, with 2,099 passing yards, 14 TD to only 5 INT. At 6 foot 6 inches and 240 pounds, Freeman is a monster, and can break sacks like Ben Roethlisberger.

The Bucs are also benefiting from the improved play of their running game, starting with rookie bruiser LeGarrett Blount. Like Freeman, Blount is a specimen at 6 foot, 2 inches and 240 pounds. And Cadillac Williams, the oft-injured 28-year-old running back, is also having a solid season. Throw in WR Mike Williams and TE Kellen Winslow, who head up a much improved receiving corps, and the Bucs have a nice little offense in the making.

The Bucs are the Chiefs of the NFC. They are playing much better and learning how to win but they are benefiting from playing a last place schedule. They've hung with the 8-2 Falcons, failing to convert a 4th and 2 on the Falcons goal line at the end of the game and losing 27-21, but otherwise, the Bucs were blown out by the other good teams they've faced in the Steelers and Saints.

So this Sunday, we'll find out what these young Bucs are made of. The Buccaneers will also be the best team the Ravens have faced at home, having had all their most challenging games on the road thus far, so we'll continue to learn more about this Ravens team, as well.

Freeman and Blount are good young players and could pose problems for the Ravens. Blount, especially, since the Ravens run defense has been lacking as of late despite being ranked 9th in the NFL. But overall, the sum of the Bucs' offense is better than the whole, since they're ranked 22nd in total offense. Their defense is ranked 10th in pts and 16th in yards, but their rush defense is 29th in yards. So you know where their weakness is on defense -- stopping the run. Now it's time for Cameron to exploit it with Ray Rice and Willis McGahee.

I do think the Bucs can hang with the Ravens for a half, but sooner or later, talent and experience has to take over -- and the Ravens have much more of both.

As long as the Ravens don't play sloppy on offense like they did against the Panthers -- fumbling 4 times and losing 2 -- I think the Ravens will eventually pull away and win 27-10 after the first half stays pretty close.

But if the Ravens turn the ball over, or the defense allows a couple of big plays for TD's, it's anyone's game.

The Ravens host the Buccaneers at 4 PM this Sunday.
Posted by SeanJ at 10:04 AM