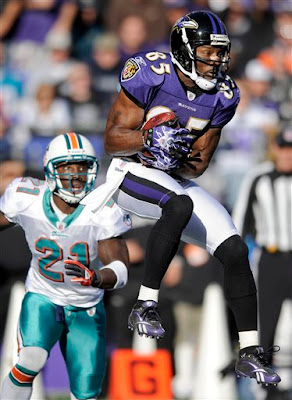 Derrick Mason hauls in a touchdown pass in the 26-10 win over the Dolphins.
The Ravens came out of their bye week a refocused team with the scare they'd received at the hands of the Buffalo Bills fresh in their minds. And with the help of some trash talk from the Miami Dolphins' Channing Crowder, the Ravens were motivated to start the second half of the 2010 season on a positive note.

And they did just that, handing the Miami Dolphins (4-4) their first road loss of the season, 26-10. Ironically, the Dolphins are 0-3 at home.

The game started excitedly enough. The Ravens scored on their first drive, capped off with a Joe Flacco screen pass to Willis McGahee (who made some great cuts and received some great blocks) for a 38-yard touchdown.

On the next drive, the Dolphins answered on a Ronnie Brown 12-yard touchdown run. And then the Ravens clamped down on defense and didn't allow the Dolphins back into the game for the rest of the afternoon.

The game was not without some turning points, however. The Dolphins failed to score a TD from the 1-yard line, when Chad Henne was unable to hook up with Anthony Fasano, who was open in the endzone. And Joe Flacco threw behind Anquan Boldin, resulting in a pass that was nearly intercepted and returned for a touchdown had the Miami defender not dropped the pass.

The Ravens also left way too many points on the field as well, stalling in the red zone on several occasions. That meant Billy Cundiff had a busy day, attempting 5 field goals and making 4 of them. Another field goal was fumbled by the placeholder.

So it wasn't a pretty win. But it was an easy win, which is something the Ravens needed after the Bills game and heading to Atlanta on a short week to play the Falcons on Thursday night.

The limited bright spots of the day were Joe Flacco, who completed a whopping 74.1% of his passes for 266 yards, 2 touchdowns and 0 interceptions. Since his week 2 debacle in Cincinnati, Flacco has thrown 11 touchdowns to just 1 interception. Ray Rice also had a huge day, rushing for 83 yards on 22 attempts and hauling in 7 passes for 97 yards.

The defense also tightened up after the drilling they took from the Bills 2 weeks ago, limiting the Dolphins to just 289 yards of total offense, and picking off Chad Henne twice. Even the special teams chipped in with kick/punt returns of 25 and 23 yards. Nothing to write home about, true, but the Ravens have been dreadful on kick/punt returns so far this year.

After the game, Crowder accussed Ravens fullback Le'ron McClain of spitting in his face. Video of the incident shows McClain jawing with Crowder, and his head jerking forward as if to spit, but nothing else. It was Derrick Mason, the target of Crowder's pre-game trash talk, who had the last laugh: he caught a touchdown, and then blasted Crowder, calling him a "horrible player" after the game while talking with the media.

And after 2 sloppy wins at home, it's time to see what these Ravens are really made of.
Posted by SeanJ at 11:34 AM