Conservative Ravens give away win to New England 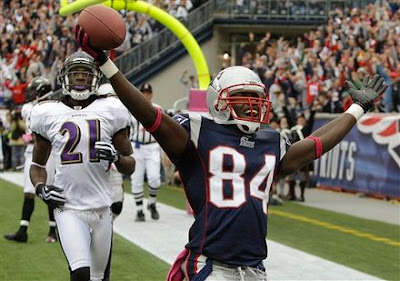 Deion Branch celebrates a 4th quarter touchdown catch in the Patriots' overtime win over the Ravens.
It was one of those games when your team is up in the 4th quarter and you start thinking about how sweet it will be to see that opposing team's fan at work on Monday and rub in the win.

I mean, the Ravens had a 20-10 lead in the 4th quarter. The lead should have been safe with the Ravens defense, right?

The Ravens, who had been able to move the ball well against the Patriots defense all day, switched to conservative mode on both sides of the ball with the 10 point lead and the Patriots climbed their way back into the game and eventually won 23-20 in overtime.

It was the kind of loss where Ravens fans want to run the coaching staff out of town: Cam Cameron for sticking with Ray Rice too long and refusing to throw down field in the 4th quarter, Gregg Mattison for using the prevent defense, which only prevented the Ravens from winning, and John Harbaugh who elected to punt on a 4th and 1 on the Ravens 47-yard line with 9:10 left in the game, instead of going for it and killing the clock.

Joe Flacco had an excellent day, completing 27 of 35 passes, throwing for 285 yards, 2 TD's and 0 INT's. And yet Cameron didn't trust Flacco to throw down the field in the 4th quarter? I'm sorry, but when you take the girl to the dance, you dance with her. Cameron's erratic treatment of Flacco thus far has been head-scratching and infuriating.

Ray Rice, meanwhile, had trouble getting going all day. He had 28 rushes and 88 yards which comes out to a 3.1 YPC average, yet Cameron put the game on Rice's shoulders in the second half, and failed to adjust when it became apparent that Rice was not able to move the chains. Willis McGahee, meanwhile, didn't get a single snap the entire game. If Cameron was insistent on running the ball to kill the clock, McGahee's fresh legs may have helped.

And the defense didn't help either. In Baltimore, you think that a 10 point lead is safe in the 4th quarter, whether at home or on the road. After all, it's the way the Ravens have won games in the past -- but those were different times when the Ravens had no offense -- and Anquan Boldin, Derrick Mason and TJ Houshmandzadeh were playing in different cities. But the Ravens defense had a hand in the loss, too. The Ravens defense allowed New England put together 2 4th quarter drives that forced overtime: a 4 minute, 8 play drive that resulted in a touchdown to make the score 20-17 and then a 7 minute, 13 play drive that resulted in the game-tying field goal.

And like the conservative play calling on offense, the Ravens defense switched to vanilla schemes, rushing only three linemen, giving Tom Brady ample time to throw in the pocket with zero pressure.

And in overtime, the generic play calling continued. The Ravens were content to engage in a battle of field position with the Patriots when they should have been going for the jugular. A Le'Ron McClain unsportsmanlike conduct penalty backed the Ravens up to their 17 yard line instead of getting the gall at the 27. And on that drive, the Ravens gained 35 yards, which would have put the Ravens around the Patriots 38-yard line. Granted, it would have been a 55-yard field goal, and Billy Cundiff has been nothing but erratic with the Ravens, but when it's for a win on the road, you have to take a shot.

But in the end, it was the Patriots who won that battle. The defense allowed the Patriots to get into field goal range with a 5 minute, 7 play, 45-yard drive that resulted in the game-winning field goal with just under 2 minutes left in overtime.

The media will lap up the Patriots come from behind win and continue to hang from Tom Brady's jock while celebrating the return of WR Deion Branch, who had several clutch catches late in the game. But most intelligent football fans will also realize that the Ravens took their foot off the throat of the Patriots sometime toward the end of the 3rd quarter, and gave the Patriots life.

It's becoming obvious that Cam Cameron has some glaring flaws in his game planning strategy. His refusal to stick with Ray Rice and his 5.4 YPC average in Cincinnati ultimately cost the Ravens the game and his insistence to stick with Rice last Sunday cost the Ravens another game. It's as if the criticism from his time as offensive coordinator in San Diego has followed him to Baltimore and he's learned nothing from it.

That said, if there is anything positive to take away from the loss, it's that the Ravens can learn from their mistakes. If they hadn't taken their foot off the gas pedal late in the game, they could have very well won. This isn't the mid-2000's Ravens anymore where a 10 point lead must be treated carefully like a valuable artifact. We've got a top-tier quarterback in Joe Flacco. We've got three excellent WR's in Boldin, Mason and Houshmandzadeh. There's a reason why Ozzie Newsome brought those guys in here -- and it's to win football games with them.

The Ravens take on the Buffalo Bills this Sunday before their bye week on 10/31.
Posted by SeanJ at 9:36 AM