A Tale of Two Seasons 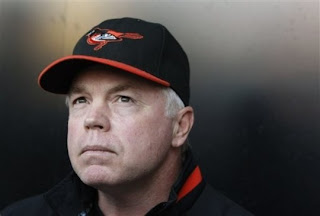 I know I got it backwards, but only because the Orioles ended what was shaping up to be the worst season in franchise history -- and one of the worst seasons modern baseball -- with two months that saw the team do a complete 180 degree turn from futility to respectability.

On August 1st, the Orioles were 32-73 and on pace for 114 losses. But then Buck Showalter arrived on August 2nd and said "Let there be competitive baseball" and the Orioles finished 34-23 during two of the most surreal and enjoyable months to the 2010 season.

Was Buck Showalter's appearance in the dugout the sole reason for the improvement? I think Occam's Razor makes sense in this situation. The easiest answer must be the right one.

The players even admitted that Buck was the reason for the better record.

So it was Buck all along!

Those days seem so long ago, yet they were barely over two and a half months ago.

The list of things that the almighty Buck Showalter has accomplished since managing his first game on August 3rd are amazing...

If Buck Showalter doesn't receive a vote for Manager of the Year, I don't know what to say. His participation in one of the most drastic turnarounds in the history of Major League Baseball deserves at least one token vote. Even if it comes from a writer at the Baltimore Sun.

Yes, Buck does deserve a lion's share of the credit. But let's not forget the players' role in this turnaround.

Brad Bergesen, who had a meltdown in Seattle in April that was painful to watch, pitched his way back from Norfolk -- twice -- to become the Orioles' best pitcher over the stretch of August and September. Brian Matusz, Jake Arrieta and Jeremy Guthrie also played a part in making the final two months of the season some of the best pitched periods of Orioles baseball in years.

After watching these guys pitch their asses off for two months it's impossible not to get excited about the rotation for 2011.

The offense never underwent the drastic transformation that the starting pitching did under Showalter, but guys like Luke Scott, Adam Jones and Nick Markakis remain the offensive core of the team. Hopefully GM Andy MacPhail will burn the midnight oil trying to get this line-up the true clean-up hitter it desperately needs.

The offseason will go by slow -- you can count on that. But hopefully we'll have some things to be excited about as MacPhail tries to upgrade this club, especially at 1B, SS and 3B.

Is it too early for Hot Stove baseball?
Posted by SeanJ at 4:59 PM