Ravens beat Steelers!!! And I was in Cancun!!! 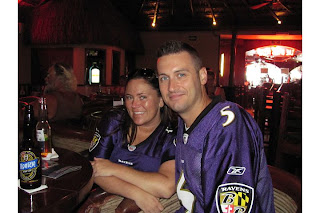 My wife Kelly and I, watching the Ravens vs. Steelers game at the Tequila Barrel in Playa Del Carmen, Mexico. 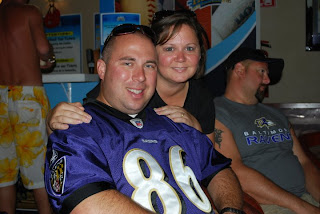 Our friends, Jason and Jaime, watching the game with us.
It's been more than a week since the Ravens topped the Steelers 17-14 in what was one of the greatest Ravens wins in franchise history.

Trailing 14-10 with just a minute left in the 4th quarter, Joe Flacco finally devised one of those game-winning drives that all other great QB's have in their portfolio, hitting T.J. Houshmandzadeh in the endzone and silencing the Steeler fans in Pittsburgh. It was the first time the Ravens have won in Pittsburgh since 2006.

The reason for the late blog entry? I was in Cancun.

Was I able to watch it, you ask?

I searched far and wide for a bar that was showing the game and finally found one in Playa Del Carmen. It was called the Tequilla Barrel. Cool place. And there was even a Steeler fan there watching the game, too.

So instead of recapping the game, which I am sure has been burned into the brains of Ravens fans by now, I'll share my experience of watching the Ravens beating the Steelers while I was in paradise.

My wife, Kelly, and my friends, Jason and Jaime, decided to go to Cancun for a much needed vacation. We'd never gone on an extended trip together, outside of Ocean City, so it was great to finally have another couple to hang out with at our resort. We arrived on Saturday, October 2nd and stayed the entire week at the NOW Jade Resort just outside of Puerto Morelos, which is about twenty minutes south of Cancun.

Originally, our plan had been to go to Carlos N Charlies, which is also located in Playa Del Carmen, a touristy town about a half an hour south of our resort. We'd heard rumors that the sports bar in our resort would be showing the game, but we didn't want to risk it. If we stayed, and the resort was not showing the game, we'd be screwed -- and miss the game.

So dressed in our Ravens jerseys, the four of us caught the local ADO bus to Playa Del Carmen. Whereas taxis can cost upwards of $30 to get to Playa Del Carmen, the ADO bus cost $1.60. If you're thinking that the local bus in Mexico is like it usually is in the movies, with people holding chickens in the back of a busted van, you couldn't be more wrong. The ADO buses are basically tour buses, the same kind that blue hairs take on their trips to Atlantic City. They are air-conditioned, have a bathroom and show movies.

When we arrived in Playa Del Carmen around eleven o'clock, we scoped out Carlos N Charlies. And when we saw it was closed, Jason began to panic. Since Cancun is an hour behind Eastern Standard Time, the games started at Noon. And with less than an hour to go, we still wanted to be 100% sure that the game would be showed, and now it looked like we'd be waiting until game time to see if the game was going to be aired because we couldn't get a definitely answer if any place would actually be showing the game.

I'd read on TripAdvisor.com that the Tequila Barrel was actually a better place to watch the game. So we headed to the other side of PDC to find it. Along the way, someone we ran into on the street confirmed that the Barrel was indeed better than Carlos N Charlies.

Along the way across town, store owners tried to lure us into their stores. "Flacco, Flacco, Flacco," they called after us, since three of us were wearing Flacco jerseys. They showed us Ravens ponchos. Mostly, they just tried to get our attention so they could sell us their wares. A few people asked us if we wanted to get high.

When we finally found the Tequila Barrel, we were able to confirm that the game was actually going to be showed, along with all of the other NFL games that day, since the bar has the NFL Sunday Ticket. It was also filled with fans of other teams, who had come there for the same reason -- to watch their teams play while on vacation. So we breathed a sigh of relief and ordered some beers, waiting for the game to begin.

Ironically, our friends Jason and Jaime knew another couple, Chris and Kim, who were staying close by in Playa Del Carmen that same weekend. So by the time the game started, we were six deep in the Tequila Barrel, cheering the Ravens on. We were representing!

The game, as Ravens fans know by now, was a certified classic. I nearly lost my voice screaming like a little girl when Flacco hit TJ Houshmandzadeh for the game winning touchdown. The Steeler fan in the bar with us tipped his cap before heading back out into the sunshine and to celebrate, the four of us did shots of pomegranate (purple) tequila.

I went on record saying that it was probably one of the best days of my life.

I still stand by it.

As we headed back toward the ADO bus for the trip back to our resort, a few more people called after us, "Flacco, Flacco, Flacco!" Some of them asked us again, "Do you want to get high?"

We were already high off a Ravens victory...and we still had a week to spend in beautiful Mexico.

It would have been an amazing trip even if the Ravens had lost. The Ravens win was just icing on the cake.
Posted by SeanJ at 10:45 AM

In the summer we use cotton and lawn collection, we use soft drinks, go out for a walk in evening. [url=http://www.elitwine.com]canada goose down parka[/url] In Part One of our interview with the unrivalled horror icon Christopher Lee, the actor recalled his early years in the horror genre and explained his abhorrence for the phrase 'horror film.' In Part Two, we learned why he decided to get involved in Tim Burton's THE LEGEND OF SLEEPY HOLLOW, and Lee shared his thoughts on Burton and lead actor Johnny Depp, garnished with some advice for any up and coming actors. [url=http://www.pariscanadagoosepascher.com]Canada Goose Expedition Parka[/url] Ivxhjqwmf
[url=http://www.canadagooseparkasalg.net]canada goose[/url] Eytbadugl http://www.christianlouboutinonlineoutlet.co.uk oshqkards

What i don't realize is in reality how you are now not really a lot more smartly-appreciated than you might be right now. You are so intelligent. You know thus considerably when it comes to this matter, produced me individually consider it from so many varied angles. Its like men and women aren't fascinated except it is one
thing to accomplish with Woman gaga! Your own stuffs great.
Always maintain it up!

Great blog! Do you have any helpful hints for aspiring writers?
I'm planning to start my own website soon but I'm a little lost on everything.
Would you propose starting with a free platform like Wordpress or go
for a paid option? There are so many choices out there that
I'm completely overwhelmed .. Any tips? Thanks a lot!